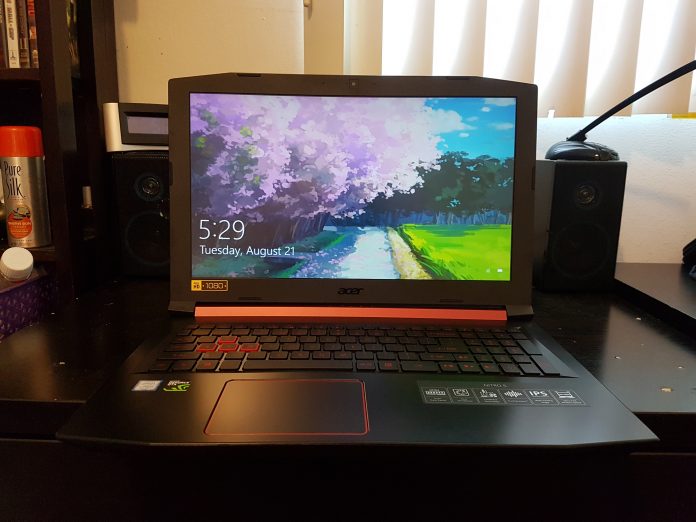 As a Software Developer, my job depends on my computer’s performance and reliability. My current desktop, with an AMD FX-8300 and Nvidia GTX 760 was getting long in the tooth and has been having issues with stability. My laptop, a Dell 3147 2 in 1, just didn’t have the oomph to handle my workload, even after throwing an SSD in it. A second laptop, my once trusty Toshiba A665D, would continually turn off after several minutes. As someone who relies on their computer for their job, something needed to change.

The box contained the Laptop, 130 watt power brick, paperwork and a Laptop Sleeve.

As far as gaming laptops go, this laptop isn’t as “gamery” as other laptop offerings from Asus or MSI or Alienware. That said, it is still solidly a gamer design, with hard tapered edges and a black and red paint job. The exhaust vent at the rear of the laptop is styled after a jet fighter’s exhaust, which is to say, very “gamery”. The laptop is covered in a glossy plastic, which is prone to collecting fingerprints. However, occasional wiping of the laptop will take care of that. For a laptop that is more “professional” looking at a similar price, consider a Dell G3.

The Nitro comes with Windows 10 Home installed. As is standard with most PC Laptops, there is bloatware installed, such as Norton Antivirus and various Acer Utilities. The Acer NitroSense Utility lets you monitor and control fan speed, with options for Auto, Max or to custom set your own fan speed. It also has graphs for monitoring GPU and CPU temperature.

The Nitro has a 15.6in Full HD 60HZ IPS Screen. This is an average screen, that gets decently bright. It isn’t HDR capable. I don’t do anything that requires accurate color reproduction like color grading, nor do I have a way to measure color reproduction, so I cannot make any statements about how well the display fills the sRGB color space. For my needs, software development and gaming, it works perfectly fine.

The display does not have a touchscreen, but most gaming laptops at this price point do not have one.

As I am using this laptop for productivity purposes, a good keyboard is a must. In-fact, I am currently writing this article using this laptop. The Nitro’s keyboard has a nice tactile feel, with good travel, without feeling mushy or being too loud. However, the layout is a bit cramped, due to Acer attempting to cram in a number pad. The left side control key is quite small, due to needing to fit a function key next to it. Acer should have put the function key next to the right side control key, so as to keep the left side control key full-sized. The right side shift key is also smaller, due to the need to fit the arrow keys beside it. Lastly I would have preferred the home and delete keys to be swapped, or better yet, swap the numlock and del key.

The backlight on the keyboard isn’t that great. It’s a dim red color, and I find it hard to see the lettering on the keys in a dark room. When on battery power, the backlight must be manually turned on using the function shortcut. After turning it on, the backlight runs on a timer, the duration of which cannot be changed or set to constantly on. If the system is restarted, backlight settings are not saved, and the keyboard backlight be turned on again.

It’s a trackpad. It’s a decent sized one, with gesture support that works well enough. It’s slightly recessed, which helps cut down on accidental presses. A button to disable the trackpad while using a mouse like on some other laptops would have been nice though. Unlike the keyboard, the trackpad is not backlit.

It has a 720p webcam. When active an indicator light comes on next to the camera. It is fine for Skype calls and such, but you wouldn’t really want to be taking photos or videos with it. The video and pictures it produces are extremely grainy and noisy.

The laptop has a Microphone Array ajoining the webcam, with 2 individual microphones. In tests, it is able to clearly pick up my voice, and others in calls with me have not had issues with clarity.

The laptop contains a non-removable 4 Cell battery. When not gaming, I got around 4 hours of battery life. Charging from empty to full takes about 2 hours.

They are bottom firing speakers. They sound fine for laptop speakers, but won’t replace a decent pair of headphones or desktop speakers. Additionally, they aren’t that loud. At maximum volume, they just barely manage to fill a room with sound.

The laptop comes with a good assortment of ports. On the left side, there is Gigabit Ethernet, USB 3.1 Type C, HDMI, USB 3.1 Type A, and an SD Card Slot. There is also a Kensington Lock port. On the right side, there is DC-in, 2x USB 2.0, and a combo Mic/Speaker 3.5mm jack. Next to the DC-in jack there is an indicator for battery status and another one for power status.

The Type C port does not support alternate modes such as ThunderBolt, HDMI/Displayport or accepting a Type-C laptop charger. Acer states that the Laptop is Oculus-Ready, which means that the HDMI is directly connected the Nvidia GPU, instead of the Intel integrated GPU (as is the case with some other 1050ti laptops).

The Nitro AN515-53 comes with an 8th Gen Coffeelake Intel i5-8300H. This processor has 4 cores/8 threads and has a base clock of 2.3ghz/boost clock 4.0ghz. The 8300H is one of the few i5s to come with Hyperthreading enabled, allowing each core to handle two tasks at a time. On paper, the i5-8300H is faster than last year’s i5-7300HQ and i7-7700HQ. And it is definitely faster than the overclocked AMD FX-8300 I was rocking before-And at a fraction of the power consumed!

The Nitro comes with 8gb of DDR4. For a modern system, 8GB is the bare minimum a computer should have, especially now that many flagship phones are now coming with 6-8gb of RAM. The RAM is accessible from a door under the laptop, with 1 free slot available for additional RAM.

The Nitro AN515-53 has an Nvidia 1050Ti with 4gb of GDDR5 memory. This graphics card is capable of handing all the latest games at high settings. When not gaming, the laptop uses the power-sipping Intel 630 integrated graphics.

It is equipped with an Intel 600p Series SSD. It has a read speed of 1570MB/s and a write speed of 540MB/s. For additional storage, there is a slot to add a secondary SATA drive.

The Nitro 5 is a considerable upgrade over my current setup. It is more powerful than my desktop, while consuming 1/10th the power. The keyboard is not the best, and will take some time to get used to. If you are looking for a good gaming laptop for $700, or just a laptop for productivity,  it is a laptop that will get the job done without breaking the bank.

Go Vote This Tuesday! Here’s What You Need To Know About Election Day.