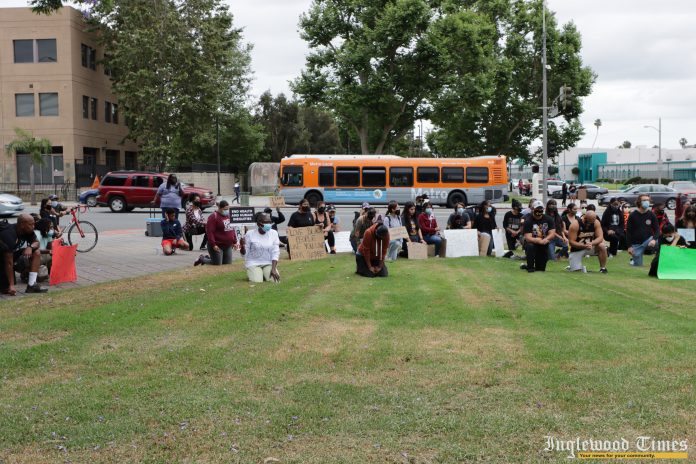 This afternoon the Inglewood Times attended a demonstration In the City of Inglewood on the Lawn of City Hall.  The protesters were students organized by a super intelligent and passionate 17 year old Student and long time resident of Inglewood named Cierra Moore a student at Animo Inglewood.

The Students had gathered and planned a march to City Hall to show their unity and to represent Inglewood and the youth that they were not only a part of this community but had a voice and wanted it to be heard.

She wanted her community to know that she felt and heard the cry of Injustice and so did her fellow classmates and friends.   The Students ,friendsand community leaders came out to share their thoughts and some of their experiences with this from both sides of the spectrum.

Present was a well respected black police officer who has followed the rules and treated all who I have seen him engage has dealt with all people good and bad with respect and professionalism.

The  Inglewood police officer Sgt. Geoffrey Meeks )Patrol Adjutant), spoke from the heart ,introduced himself as not only a police officer but a man who not only had a family but was not just to be judged by his uniform which he represents to the fullest ,but  as a man.

He explained that there will be injustice and things will never be perfect but  not all  his fellow police officers would have done that ,and that once a man is down it’s over ,there was no reason to kneel on anyone’s neck like that.  That is not used in all training facilites but attention has been brought to the way policy and training is done in different Cities and States.

There will be reforms because of the communication and laison with the people in the community, and through the efforts of those who stand for change through peaceful and effective protest.  Not all police are bad and not all police have done what the officers in this incident have done.

The Mayor was addressed and shared his service and history and assured the protesters that In Inglewood any incidents that occurred were dealt with and swiftly.

All leaders present out of honor and respect shared a moment with the protesers and all leaders present took a 8 min knee in silence  with all the protesters side by side in front of City Hall to show solidarity and reconciliation within a strong respected black community who understood the injustice and tool that moment show respect for the fallen George Floyd.

The Sgt.Geoffrey Meeks, Cinder Eller Kimbell – Sr. Community Affairs Laison shared their feelings and how they felt about these injustices and how it affected them.  They again stated that to change your community and the things you don’t like you lobby and hold accountable your public officials to bring about the change and be a part of that change by being active and seeking jobs and roles in society to give you a voice to change these things which is why they are doing what they are dong right now.

They explained that becoming a part of the solution was to be on the right side of the law so that he could they could change the way things are done.   They stated that many people are pissed off and angry but we have to put our voices and heads together and make it better.

As concerned citizens  these children whom will be the future were compelled to stand together and change what they saw wrong by participating in this march. Yes! They came out to protest injustice  in a peacefulmanner.

The recent protest Countrywide has mobilized people of color everywhere and the killing of innocent black men and women were remembered as Cierra Spoke to the crowd. All this wasinspired  by the rage and anger brought on by the George Floyd Murder.

The event again was peaceful and when we try to make sense of the whole thing the bottom line is that we must stand together and change all the social ills, racism and hate and create equal opportunity and respect for people of color.

Chargers Roster Down To 53: Who Made The Cut

Op-ed: What Would You Do?