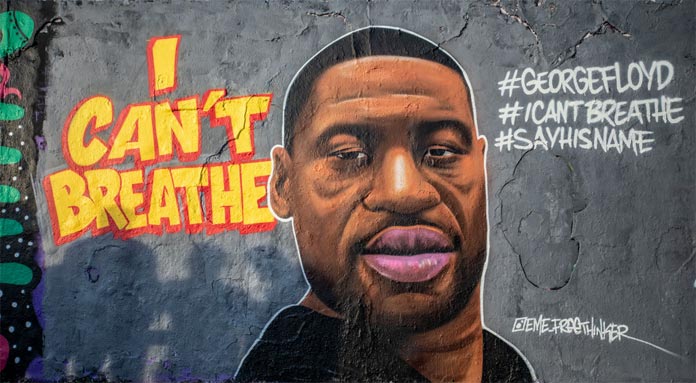 His death Sparks outrage against racism, and Injustice as it builds up in America. People march and protest all over the world. What happened to Floyd has been happening for years. There is no way possible to justify placing your knee on a man’s neck for 8 min for any reason. He was killed senselessly and mistreated by police over a clerk who called saying he had a counterfeit $20 dollar bill and police were called. He was placed in a police car and taken out and forced to the ground with a knee placed on his neck while he cried out. He said, “I can’t breathe!” He pleads for his life and the cop would remove his knee off of Floyds Neck. Floyd called his mother’s name and urinated on himself as the other police officers looked on not moving a muscle to stop the cop who was killing and suffocating the life out of Floyd.

George Floyd later died and the police officer was charged with 3rd-degree murder. George Floyd was clearly murdered in the 1st Degree murder. The other 3 police officers at first were not charged and outrage exploded in the streets all of America. People protested and riots broke out all over. The police and protesters clashed and looting and violence lead to police officers and police cars burning and destroyed. In Minneapolis, the police station was burned to the ground. The public officials and the police had to call the national guard out to control the people and to stop the looting caused by opportunists who were tarnishing the name of the non-violent protest.

The president and police chief made inflammatory statements that further infuriated the people creating more anger and disrespect to a people who have been living in poverty and felt the injustice of racism and the same type of abuse by law enforcement build-up for years with no voice or justice in place to stop the blatant loss and abuse of black lives. People from all over the world from all color creed and nationalities came out to protest. White women stood as human chains, holding hands and placing their own lives in front of black men and in between the police to keep black men from being killed. The people are calling for justice and the end to racism and social injustice.

The people want the policemen charged with first-degree murder and charged all together as accessories to murder. In any black community people, all involved in a crime would be charged. The only one charged in this was the officer with his knee on Floyd’s neck. The officer has had 18 complaints of the same injustice committed on other people and was still on the force and able to hurt more of the people he claimed to serve. Since this, he has been arrested and charged with 3rd-degree murder and this has been updated to 2nd-degree murder.

The officer’s wife apologized to the people and has filed for divorce. Black lives matter and many other organizations came out to support George Floyd and all the other African American people who have suffered injustice with no recourse or action taken to defend their lives or speak of the lives lost or wrongfully taken. This marks a turning point and a need to change in our community. Black lives do matter and it’s sad that Martin Luther King and Malcolm X all marched in the late 1960s for the same injustice and request for rights to be treated justly and dealt with as human beings with the same human rights as all other men and we are still at square one.

We must stand together and the call to action must bring change. We as people want equality and the ability not to be judged and treated any less than how whites are treated and given equal opportunity as a business, loans, and respect. Not being slammed against police cars, searched and cuffed while placed in police cars or shot to death like dogs and it is justified and go unchecked.

There is so much wrong with this picture we need to keep protesting and demand our human rights that we may be able to live in peace and stop being targets and feared by racist people who perpetrate and believe that all black men and women are criminals and should be treated as slaves and called niggers. This will no longer work and people will no longer accept this. We must demonstrate and explain to the youth black and white not to loot or do wrong because that makes us like them.

We will have change and we as a people must bring that change and hold those accountable that need to bring that change into existence not just empty political promises and smiles with no contracts and no money to help us live like those who they have in their circle who eat while they smile with us as we are mistreated and left out of the pot. The death of Goerge Floyd has brought awareness to pain and injustice that people have endured for too long and now is the time to speak out.

On The Job Training For Veterans (Apply By Dec 24)