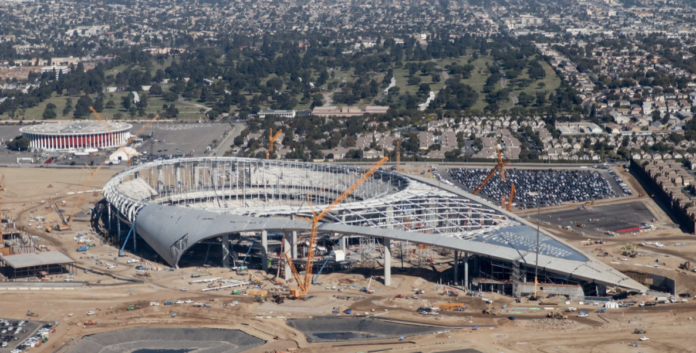 I’m positive everyone living in Inglewood City has seen the Rams Stadium passing by on their way to work, the park, or the store. It is VERY hard to miss, since it is the second main attraction Inglewood has for entertainment besides the well known Forum across the street. Most residents are okay with the Forum because it doesn’t take up as much space in their neighborhood, on the other hand they aren’t agreeing with the new LA Rams stadium being built right next to their houses, and apartments. This was already upsetting nearby residents so upon  them previously witnessing a video on twitter surfacing of a lake being built in connection with the ongoing stadium project residents have become outraged.

Ladies and gentlemen the home of my los Angeles @RamsNFL. Yes that is an artificial lake right in front of the stadium…@NFL pic.twitter.com/LTsE006T6E

Inglewood homeowners were not shy to voice their opinions on social media and in person to developers. Quickly coming to a conclusion that this is gentrification at its finest.  Another resident decided to speak up about the ongoing situation, retweeting the video and commenting “So they can build this for the rams but can’t fix the potholes, sweep the sidewalks, or fund public education in Inglewood……i hate  this govt”. Another resident also shared a Instagram post saying “All this means is i’m about to be priced out of my own neighborhood. Sad”.  Teens in the local area are posting and sharing the same video as well complaining about how Inglewood is changing daily.

Top searches on google relating to Inglewood are showing up with social media posts, and blogs about the upcoming lake, Rams stadium, and gentrification. Many people are bringing out the facts, starting with the current population of black people in their city is now 50%. Also mentioning L.A and Inglewood are no longer the best places for people of color to live in. I know I’m not the only one upset about the new changes in Inglewood; it no longer feels like home.

If you are feeling the same about what’s going on in our neighborhood don’t be afraid to share your opinions on the Inglewood Youth Foundation’s Instagram: iyf501c3

Person Dead After Shooting In Inglewood. Suspect at Large

COVID-19 Vaccine Program Has Begun: When Will You Be Able To Get The Vaccine?