Ad
Home Sports Football To Live or Die in L.A. – Rams or Chargers? 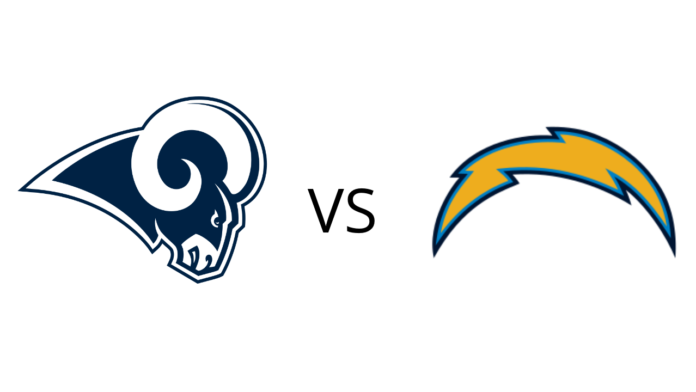 Through four weeks of the NFL’s 2018 regular season, Los Angeles’s Rams and Chargers appear as if they may be headed in different directions. The Rams have lived up to their paper billing starting the season 4-0 with an offense that seemingly cannot be stopped. The Chargers, who some expected to challenge for the AFC West crown, have struggled and are 2-2 as the new season has reached the end of its first quarter. Which L.A. team lives and which one dies?

The Rams have eclipsed the 30-point plateau in each of their first four games and are averaging a mere 35 per contest. Quarterback Jared Goff is connecting on a blistering 72.4 percent of his throws for 1,406 yards and 11 touchdowns. In the Rams last game, a 38-31 win over Minnesota, Goff tore apart what was considered one of the NFL’s best defenses throwing for 465 yards and five touchdowns. Goff is on pace to throw for 5,624 yards and 44 touchdowns.

If you think the Rams are scary on offense, take a look at the defensive depth chart. Reigning NFL Defensive Player of the Year Aaron Donald and DT Ndamukong Suh form part of what could be the best defensive line in the league. Head coach Sean McVay and the front office went out in the offseason and signed cornerbacks Aqib Talib and Marcus Peters to bolster the secondary. The early results have the Rams giving up just 16.8 points per game, fifth-best in the league.

With Talib out for at least a month with an ankle injury, Sam Shields, who missed all of 2017, has stepped in and performed admirably. Not only is the Rams’ starting lineup solid, the team has depth as well. It is that depth that could take them very far into this postseason.

The Chargers, whose defense was also considered among the NFL’s best, have limped to a 2-2 start with wins over Buffalo and San Francisco two teams with a combined record of just 2-6. The Chargers were third in the NFL last season in points allowed per game yielding just 17.0. So far in 2018, the Chargers defense is 28th in the NFL giving up 30.0 points per game.

A big reason why has to do with the left foot of DE Joey Bosa. The 2016 NFL Defensive Rookie of the Year tallied 12.5 sacks last season and combined with LB Melvin Ingram to form one of the most fearsome pass rushes in the league. Without Bosa, the defense has been beaten by the likes of AFC West rival Kansas City and their city-mates, the Rams.

In Week 3, Goff threw for 354 yards and three touchdowns and Rams RB Todd Gurley ran for 105 yards and a score in a 35-23 victory. The Rams are a clear Super Bowl favorite after the first quarter of the season. Their counterpart, the Chargers, will get a chance to get back into the thick of things in the AFC West race with games against Oakland and Cleveland in Weeks 5 and 6. The rest of the schedule is brutal though with games at Seattle, at Pittsburgh, at Kansas City, and at Denver. Without Bosa, the Chargers may “die” in 2018.