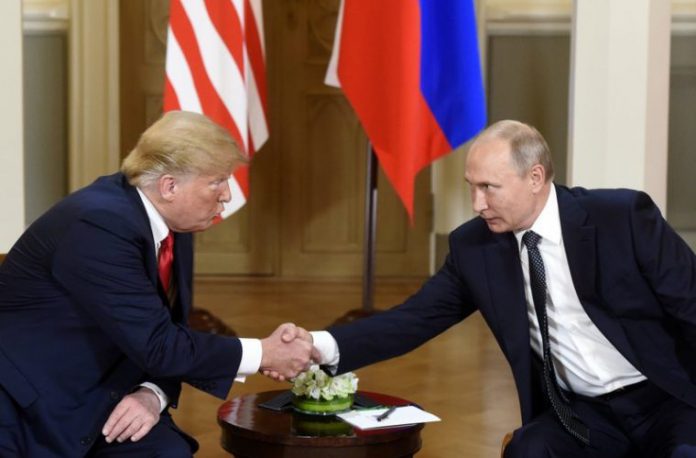 Donald Trump and Vladimir Putin have finished their highly sensitive talks in Helsinki after two hours, with no hint that Moscow’s election meddling was discussed.

Speaking after the meeting, the US president said: “I think it’s a good start. Very, very good start for everybody.”

Trump and Putin sat down for lunch after the talks, each flanked by six aides.

The leaders entered the gothic hall in the Finnish presidential palace for talks at 2.10pm local time (1210 BST), 50 minutes later than expected, after characteristic tardiness on the Russian president’s part. The US president reportedly countered by waiting until Putin had arrived at the palace before leaving his hotel.

The leaders stood for a moment for photographers before taking their seats with a small vase of white flowers on a table between them. Trump, leaning forward in his chair, appeared to wink at the man who, slouching in his, is widely regarded as an adversary of western democracy.

Both men then made brief remarks against a backdrop of three US and three Russian flags. Speaking through an interpreter, Putin said he and Trump had maintained regular contact but “of course, the time has come that we speak extensively about our bilateral relations and various problem points around the world. There are enough of them that we ought to pay attention to them”.

Mail Bombs Were Sent To Maxine Waters, Similar To Other Packages Sent To Clinton, Obama