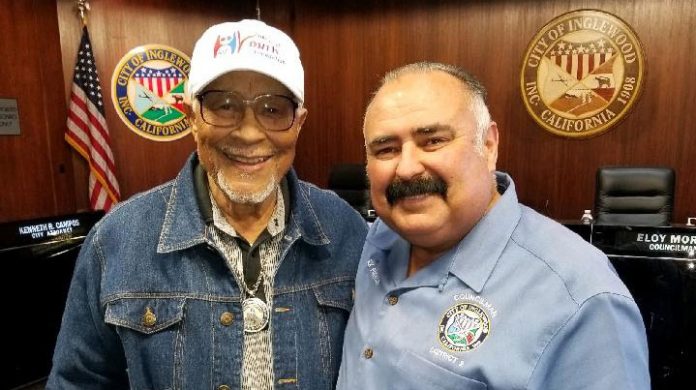 Willie E. Agee
(October 20, 1929 – April 27, 2020)
This week’s newsletter is being dedicated to a close friend of mine, Willie E. Agee, known to many as Mr. Inglewood. Mr. Agee, a 55 year resident of Inglewood passed away on Monday, April 27, 2020 at 90 years of age.
Mr. Agee was a proud resident of the City of Inglewood and was known for saying at City Council meetings, “My name is Willie Agee and I live in the beautiful City of Inglewood.”  Mr. Agee and I would always greet each other by saying, “My brother from another mother.”  We would shake hands and hug frequently with huge smiles on our faces.  As a close friend, Mr. Agee always took the time to say some encouraging words to me and reiterated his support of my work in District 2 which meant a lot to me.
Mr. Agee came to Inglewood in the late ’50s and has served the City of Inglewood and three mayors as a commissioner for 26 years on the Parks and Recreation Commission with the last 13 years as the Chairman.  Some of the projects he was instrumental in accomplishing included, the skateboard park in the larger parks, relocation of the transportation mural, and the renovation and reopening of the playhouse at Ed Vincent Park. The Mayor and Council renamed the Inglewood Playhouse to the Willie Agee Playhouse on June 4, 2016 in recognition of his community service and leadership.
Mr. Agee was a Korean War combat veteran hero.  He frequently and proudly wore a medal given to him by the South Korean Government in appreciation of his bravery during the war.
Willie Agee was an important part of the Inglewood community. His love for the City of Inglewood was unwavering.  He dedicated his life to his community.  Mr. Agee will be greatly missed.
RIP Willie E. Agee.