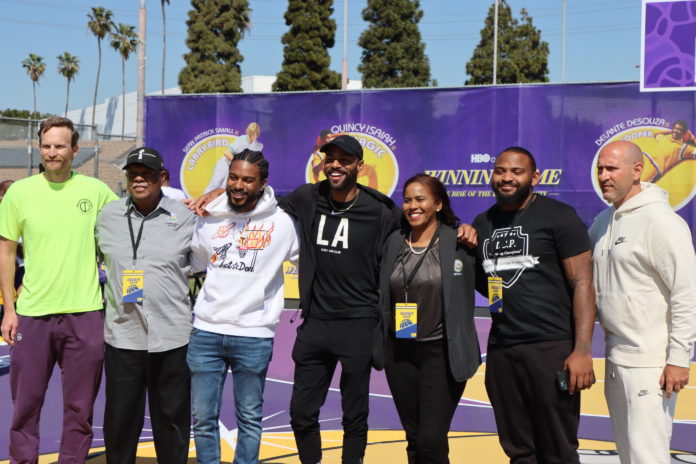 As part of the promotion for the premiere of their latest drama series “Winning Time: The Rise of the Lakers Dynasty” HBO partnered with Project Backboard, The City of Inglewood, and David Flores a local Californian artist to renovate a local basketball court located at the Rogers Park.

The new court was revealed to the public in an exclusive, all-day event that was originally scheduled for Friday, March 4th but had to be rescheduled to Sunday, March 6th due to the passing thunderstorm. The unveiling included a ceremony dedicated to the community and a small workshop led by celebrity basketball trainer Idan Ravin.

“We have had eyes on refurbishing a court for a year now. We worked with the city of Inglewood and Project Backboard to really figure out the right court, the right canvas, that would really have an impact. That the refurbishment can play a big role in the community.” Manager of the multicultural marketing team at HBO, Malcolm Ford said.

The renovation of the court will have a significant impact on the community by adding an inviting piece of art to the basketball court. “By renovating the court and adding something bright and colorful to the space really makes it more inviting for more people to come out and gather.”- Project Backboard director Dan Peterson said.

There are plenty of kids in the community who already use this court to practice their basketball skills. With the refurbishment of the court, the kids and the community can be encouraged to improve their abilities.

“It was a dope idea for them to put this court here because there is a lot of kids in this area that plays basketball. And this is a good start for them to get a foundation. They got somewhere safe where they can come and play, a good court to get their skills out.” One of the participants explained.

The court will open a new space for those that are looking to improve their skills and expand their talent. Also, to welcome those members of the community that have been interested in starting to explore their abilities and have not done so.
“Mostly I want to thank HBO for investing not only in the community but in our youth,” Inglewood Mayor James T. Butt highlighted in his remarks. During the unveiling ceremony, HBO also donated $10,000 to the Inglewood College Preparatory School (ICPS) to support their basketball program.

ICPS is passionate about developing its student-athletes to be well-rounded citizens who are actively engaged in the community. They continually seek ways to identify community service opportunities. All student-athletes engage in service projects throughout the year. They emphasize day in and day out that no matter what path that you may take in your life, it is important always to find the time to engage with your community and give back.

“I don’t know If you have noticed but we are once again the city of champions. And what we want to do is make generations of future champions not just in the court but in our schools as well” Inglewood Mayor James T. Butt concluded.

HBO’s Winning Time: The Rise of the Lakers Dynasty is the fast-break new drama series that goes back in time to chronicle the professional and personal lives of the 1980s Los Angeles Lakers, one of the sports’ most revered and dominant dynasties. Check out this Dramatic miniseries about the glitz and glamour of 1980s Los Angeles and the rise of the NBA’s Lakers, Dr. Jerry Buss, and Magic Johnson only on HBO.

Tips From a Realtor® on Selling Your House After a Divorce