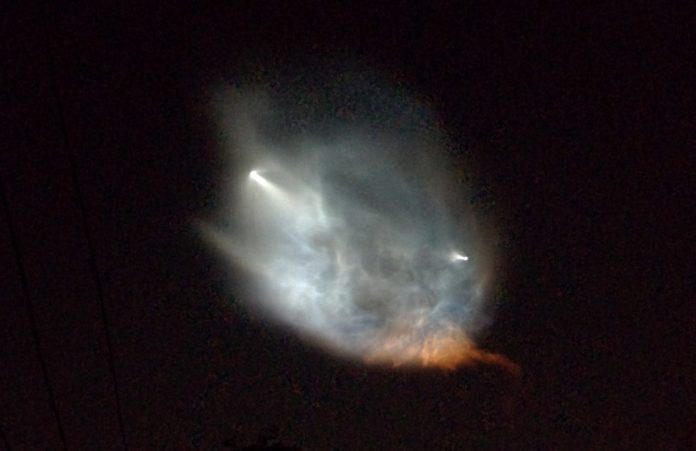 SpaceX launched their Falcon 9 Block 5 rocket Sunday Evening, lighting up the skies over Inglewood and the rest of Los Angeles. Shortly before 7:30pm the rocket launched from Vandenburg AFB, located about 100 miles north of Los Angeles. It ascended into space to deliver the SAOCOM 1A satellite for the Argentine Space Agency CONAE.

SAOCOM 1A is one of two Earth Observation Satellites. Its main purpose is to use radar imaging to detect and study the effects of natural and man-made disasters.

Sunday’s launch was SpaceX’s 17th launch of the year, one short of the previous record they set last year, 18.

After the first stage was finished with its duty of delivering the second stage and payload, it turned around and landed back at Vandenburg AFB. It made a successful landing. This marks the first time that SpaceX has landed on land on the west coast, something that has become routine at its Florida Cape Canaveral launch site. SpaceX’s landing and reuse of its rockets is how it hopes to bring down the costs of spaceflight. Other rockets flying today are discarded after just one use, falling back to earth as expensive trash. SpaceX hopes to lower the cost of access to space by reusing the rocket, much like how airplanes are reused.

As the rocket lifted off just shortly after sunset, its plume visibly glowed as sunlight hit the rocket’s plume high up in the atmosphere.

Twitter was alight with people watching the spectacle unfold:

The #SpaceX launch was one of the coolest things I’ve EVER seen! pic.twitter.com/4csOPnT0SF

The @SpaceX launch looked like an Independence Day invasion. We Googled it to make sure then snapped this! So cool, @elonmusk! #SpaceX pic.twitter.com/xSlk8K0aL9

Did you catch the #SpaceX launch? We did — it was definitely spectacular to watch. pic.twitter.com/MjCrOvMjy9

This is not the first time this has happened in Los Angeles. In December 2017, a SpaceX Falcon 9 flight created the same phenomenon. The glowing rocket plume amazed rush hour drivers, and even caused an accident:

Tips From a Realtor® on Selling Your House After a Divorce

Staying Positive During These Tough Times