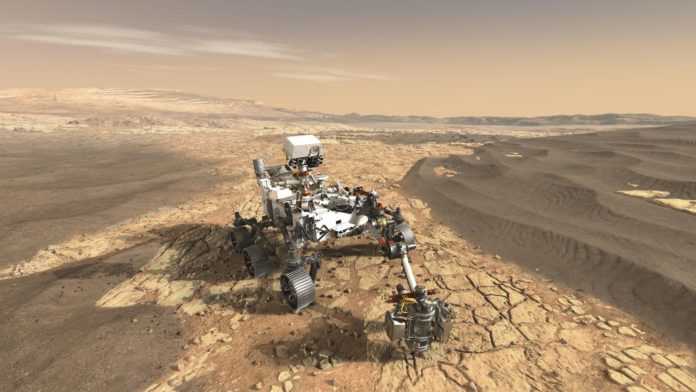 February 18, 2021 – NASA’s newest Mars Rover, Perseverance, is expected to land today on the surface of Mars. This follows a several month Journey from Earth where it launched atop a rocket from Cape Canaveral, Florida. Landing is expected around 12:50 PM PST, and will take around seven minutes to complete once Perseverance hits Mars’ atmosphere.

Perseverance is the next rover mission to be sent to Mars, following Curiosity in 2011. This mobile science platform is the size of a small car and weighs over 2000 pounds. It is powered by a nuclear-powered generator that charges its batteries and powers the rover during operations on Mars.

This new Rover’s mission is to search for signs of ancient life. For this, Perseverance includes a suite of cutting edge instruments including a tool to detect signs of organic chemicals.

Also onboard the rover is a Plaque dedicated to COVID-19 healthcare workers, as well as a microchip etched with the names of more than 10 million people who submitted their names to NASA’s “Send Your Name” program.

How to use HIIT to REV UP Your Metabolism